It is hard to believe that the very place where now Austria’s tallest building soars was once characterized by garbage, decaying wooden huts and allotments. Because the formerly unregulated tide of the Danube caused numerous floods in this area. This made it almost impossible to build significant buildings on the Danube floodplain.

Only the Danube regulation from 1970 to 1875 made the area of ​​today’s Donau City flood-proof. For this purpose, a flood plain was built with the Hubertusdamm in today’s districts Donaustadt and Floridsdorf. From that moment on the main stream was called Old Danube. With time the city of Vienna announced the leases of approximately 1000 inhabitants of this area, and increased the landfill instead.

The area heads into the future

Since 1964, the International Garden Show took place on a part of this area, the city gradually dissolved the landfill. The majority of the garden showground has been preserved in today’s Donaupark. However, the Danube Tower became the absolute landmark of this area. It was built from 1962 to 1964 due to the Vienna International Garden Show. At that time, plans were gradually being made for an urban development along the Wagramer Street. However, a concrete concept did not exist yet.

Since Austria promised the UNO headquarters in Vienna in 1967, the construction of an extremely significant building began in 1973 – the Vienna International Center. Also known as UNO-City, it is the official residence of many international organizations. It is located between Wagramer Street and the Danube Park. The VIC was finally opened in August of 1979. In addition, with the re-establishment of the second Reichsbrücke in 1980, a subway line was included. Thus, in 1982 it was already possible to reach the northern bank of the Danube with the U1 line. Furthermore, popular leisure facilities were created with the New Danube and the Danube Island. In addition, the Vienna International Center was expanded in 1987 by the Congress Center Austria Center Vienna (ACV).

In harness with Budapest, a world exhibition was meant to take place in 1995. The exhibition venue was planned to be the Danube area, which was at that time still characterized by flooding and pollution. As a result of an architectural competition, the design of the exhibition area should develop. Internationally selected offices, architects from Austria and Hungary as well as students were allowed to participate in the architectural competition called “Building and Design Concepts EXPO 95 in Vienna and Reuse”. In the end, there were 84 projects to choose from. The final decision was made in favour of  the project by the two architects Sepp Frank and Rudolf Zabrana.

Thus the preparations for the Expo continued. First, the former landfill should be sealed with a plate. After that, however, they agreed to excavate the entire landfill. As a result, a total amount of 965,000 tons of waste were excavated. But when it came to a referendum in May 1991, the majority of the population decided against the Expo. Therefore the Expo 95 was canceled. Nevertheless, they wanted to use the potential of the unused area. Especially since it was already under construction. For this reason the recovery company Vienna Danube Region Development Corporationled  – WED was established in the same year. The architects Adolf Krischanitz and Heinz Neumann were commissioned to draw up a plan for a future district.

The Donau City was born

Already during the planning for the Expo they were thinking about covering the Danube bank A22 motorway in the area of ​​the Uno City. This was ultimately enforced until 1996. Thus, the most frequented tunnel system in Austria and at the same time Vienna’s longest road tunnel was built – the Kaisermühlen tunnel.

Moreover, the overburden of the A22 has created an important foundation for the buildings below. But as a result, there were considerable differences in the levels of the new district. To compensate for this, the so-called “Donauplatte” was built. The car and pedestrian traffic is regulated at different levels. There is also a separate media layer responsible for the technical infrastructure. Telecommunications, water, electricity and district heating are managed here. The first building in the new district was built between 1996 and 1998 – the Andromeda Tower. Therefore, a distribution structure was created parallel to the highway. 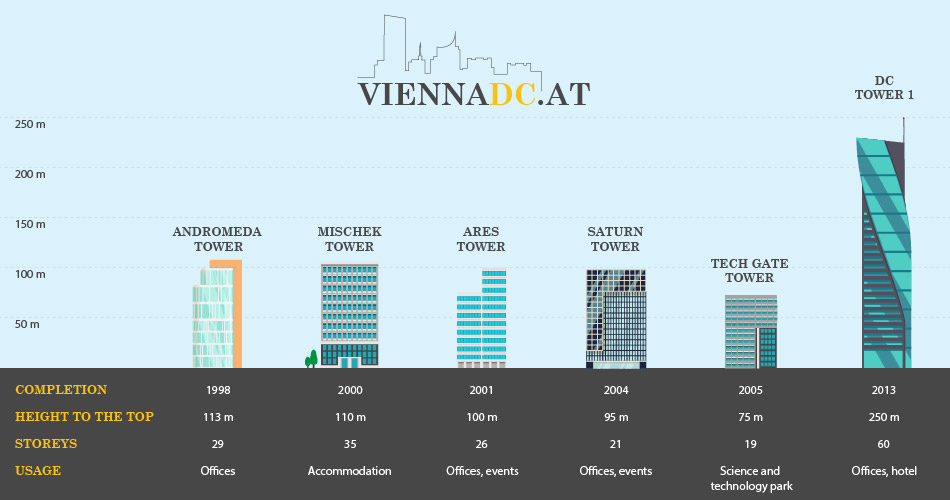 A skyline on the Danube plate

In 2002 WED announced a design competition on an international level. This competition was about the last section of the Donau City. Finally, the French architect Dominique Perrault created the masterplan. Perrault designed, among other things, the DC Towers as a kind of “bridgehead”. They were meant to represent the gateway to the Donau City.

DC Tower 1 was established on 26th February 2014 is thenceforth Austria’s tallest building. The modern steel-concrete construction will be supplemented in the next years by further skyscrapers: DC Tower 2, DC Tower 3 and Danube Flats. However, this construction project has been repeatedly postponed in recent years. The TC Tower 3 should be completed in 2021 and function as a dormitory. In the middle of 2019, the last tower will be under construction. The DC Tower 2 should therefore, ideally in 2023, decorate the skyline as a twin brother of Tower 1.

Infrastructure and road system of the Donau City

The Donau City also consists of a complex tunnel system. These include:

Beachfeeling in the Vienna DC

Is that possible? The answer is definitely, yes! What was used to be called Copa Cagrana is now the CopaBeach. Loungers in the sand, good music, large green areas and a great gastronomy offer invite you to linger. The newly designed leisure area at the New Danube can look back on a successful summer season with good reason.

Nevertheless, the City of Vienna endeavours to make the area even more attractive in the future. Therefore the CopaBeach will be enhanced by a chill-out park and a large sun terrace. You can probably use these renewals as early as Summer 2019.

A place to relax or cool down on hot summer days – and all in just a 6 minute drive from the famous Stephansplatz. It is nor surprising that Vienna was voted the most liveable city in the world for the ninth time in a row!