Living in the Donau City

The Donau City in Vienna’s 22nd district, Donaustadt, does not only offer numerous jobs. Living on the banks of the Danube also enjoys increasing popularity. A variety of recreational activities, green areas and various facilities make the Donau City a perfect place to live. Also because it is very close to the city including access to public transport. Whether in the Mischek Tower or in the wohnpark donaucity  – The Donau City offers its residents a fabulous area, where you certainly can spend your future.

The so-called Mischek Tower is a 110 meter high residential building in the Donau City. It was designed by the married couple Delugan-Meissl. It was built in the years 1998 to 2000. Until 2002 it was the highest residential building in Austria, after it was replaced by the high-rise New Danube. The Mischek Tower consists of precast concrete elements and has a total of 35 floors. This makes it the highest prefabricated house in the world. The tower has about 500 apartments, most of which are supported by the state of Vienna.

A residence for the young population

The Mischek Tower is aimed specifically at younger people from different income classes. That’s why the constructors paid special attention to costs, environment and quality. The target group are young and dynamic people who are firmly in life. They use the optimal traffic connection as well as the modern and varied environment of the Donau City. Moreover, activities related to sports and entertainment are right around the corner.

But, that’s not all that the Mischek Tower has to offer its inhabitants. Fast Internet, high-speed elevators and first-class security facilities are an integral part of the skyscraper. Furthermore, there is a private concierge service, which is available to the residents round the clock.

The wohnpark donaucity convinces with more than 1000 apartments, many restaurants, offices, offices and a disability organization. In addition, the residents benefit from the numerous recreational facilities and the central location to the city, which can be reached by public transport in about 15 minutes. It takes a maximum of ten minutes to walk on the U1 line without having to cross an intersection.

Furthermore, the house is located directly on the banks of the New Danube. Thus the ever-popular beach CopaBeach is right on the doorstep. The perfect place to sip a cocktail after work on the shore. And even if you drink a little bit more, the way to bed is not too far.

Even the youngest residents are not neglected

Not only adults take advantage of the wohnpark donaucity. Because even on the smallest inhabitants of the house is taken care of. A day care center, an English-speaking kindergarten and a bilingual elementary school spare the children the way to the city. On top of that, this speaks for the cosmopolitan and international character of the Donau City. In addition, the children have plenty of green space for playing. These include, for example, the Danube Park, the Danube Island and the park on Kaiserwasser. Of course there are also several playgrounds. And even in bad weather, the kids can let off steam in the warm. There are separate children’s and recreation rooms.

A modern equipment alone is no longer all that matters. When constructing the residential park, consideration was also given to the environment. This resulted in an ecological living concept. This includes the following points:

These features not only favor high living comfort, but also help saving costs. 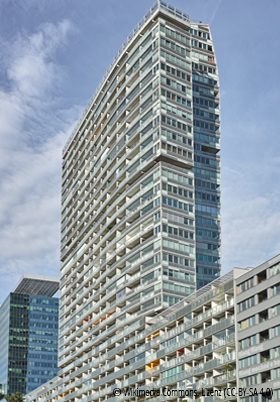