The gateway to the Donau City

The so-called Donau City Towers were designed by the French star architect Dominique Perrault. Only the DC Tower 1 is completed, which is at the same time the tallest building in Austria with a height of 250 meters. It was established on the 26th of February in 2014. The WED Vienna Danube Region Development Corporation owns the terrain of the tower. In addition, the skyscraper ingratiates with a green construction method. The construction and equipment comply with the energy and sustainability requirements for a green building of the European Commission. Moreover, he received the platinum status in the quality category and thus the highest quality level.

The second tower is still in the planning phase. According to current information it should go into construction in mid-2019. It will be about 168 meters highBefore that, the much smaller DC Tower 3 will be built in which a student dormitory will be located. Therefore we only can wait tensely for the second tower, which will represent together with the DC Tower 1, a collapsed monolith.

Development and concept of the DC Towers

2002 – the year in which it all began. In this year, the WED Vienna Danube Region Development Corporation advertised an international competition for the Danube region, which was about the design of the last section of the Donau City. Dominique Perrault from France eventually won the contract. In addition, he was commissioned to create a master plan for the remaining area of ​​the Danube-City.

Thus, great responsibility was placed in the hands of Perrault. Not least because the vacant lot of the Donau City directly at the Reichsbrücke, the most famous bridge in Vienna, is extremely valuable. Therefore it had to be something special, a landmark of the Donau City should be created. And that is exactly what Perrault, who also designed the National Library in Paris, realized in his plans. After about 120 different designs, the architect presented his well-conceived and magnificent masterpiece: Two towers should represent an uneven, in the middle broken monolith and at the same time form the city gate of the Donau City. For the remaining area, which surrounds the two towers, the architect has provided a living and communication space. But the design for the significantly smaller, third tower came from the Vorarlberger architectural firm Dietrich | Untertrifaller architects.

Construction of the tallest building of Austria

For the realization of the building, Perrault worked together with the Viennese office Hoffmann-Janz Architekten. Originally it was planned to start the construction in 2007. But the start of the construction pushed further and further back, so that the starting shot was made in 2010.

The main tasks were splited as follows:

The first activities started at the end of February 2010. However, the official start of the construction was the 17th of June 2010. At this time the laying of the foundation stone started. Already in December of the same year, the construction of the foundation ran at full speed. Since the construction site was right next to the cover of the A22, a special deep foundation was needed. A total amount of 13,000 cubic meters of concrete are located in the area of ​​the floor slab. In the end, the civil engineering was completed within six months.

The construction of the DC Tower 1 started at the end of March 2011. In addition, the first underground storeys were already available at the beginning of April. At the end of April, the first floor was built above the surface of the earth. Also the concrete core gradually took shape. In July, the building was already visible from every higher building in Vienna. With the building growing, the concrete core disappeared the following month. Furthermore, the construction of the 13th floor was completed.

In addition, the glass facade was raised on the north, south and west sides. In September the exterior glass wall was added on the east side as well. Although all sides of the tower were equipped with wind-and-weather protection facades, there was no apparent progress in terms of height. Thus, the date for the opening of the beginning of 2013 was also postponed to the summer of 2013 at the earliest.

In spring 2012, the tower under increased in height again. About every 4.8 days it was extended by one floor. By April 2012, the building reached about half of its final height. In October, the 60th floor and thus, the last floor was completed. To achieve this, there was only a 6-day week according to the WED. The last elements of the facade were finally installed in late summer 2013. With the installation of the 30-meter-high antenna, the construction was finally completed on 19 September 2013. Incidentally, a special helicopter was needed to attach the antenna.

Last but not least, the 250 meter high DC Tower 1 was inaugurated on 26 February 2014 as the tallest building of Austria. Among the guests of honor were, of course, architect Dominique Perrault, mayor of Vienna Michael Häupl, former astronaut Buzz Aldrin and former mayor of New York Rudolph Giuliani.

Appearance and features of the Donau City Tower 1

The DC Tower 1 is not just a skyscraper that serves its purpose. Much more, it gives the entire Donau City a new and modern appearance. Especially when the second tower will be built on the Danube plate. Because together they should, as already mentioned, form the gateway to the Donau City. In addition, according to Perrault, several towers stand for identity and city flair.

At the already completed first tower, an enormous ease can be undeniably recognized. Above all, the wrinkling of the facade gives the tower something special. Not least since it makes it possible to reflect special lighting conditions and events. These differently offset waves in conjunction with the captivating glass facade make the proximity to the Danube clearly noticeable. But inside the building it is quite different. Because on the inside the flowing, immaterial character is less essential. The architect prefers present and physically strong spaces. For example, sturdy natural stone surfaces can be found in the halls and corridors.

Other special features of DC Tower 1 include:

Use of the skyscraper

In the lower 15 floors the design hotel Meliá Vienna is located. It is a five-star hotel of the Spanish Sol Meliá group. It refers to 253 rooms and an event space of 1079 m². In addition, on the 57th and 58th floors there are catering facilities such as a restaurant, a bar and a lounge.

On the second floor of the tower the 1700 sqm John Harris Fitness Club is located. It has its own wellness area with an indoor pool. On floors 53 to 56 it is possible to rent a 300 sqm Sky-Loft, which has two storeys.

The remaining floors are used by companies as office space. The following companies are, for example, in the DC Tower 1:

Here is an overview of the floor layout:

Dominique Perrault has done a great job with the design of the DC Towers. An entrance gate to the Donau City, which is marked by both the past and the future. The DC Tower 1 is a successful masterpiece and increases the joy of its twin brother, which will hopefully soon be in the starting blocks. 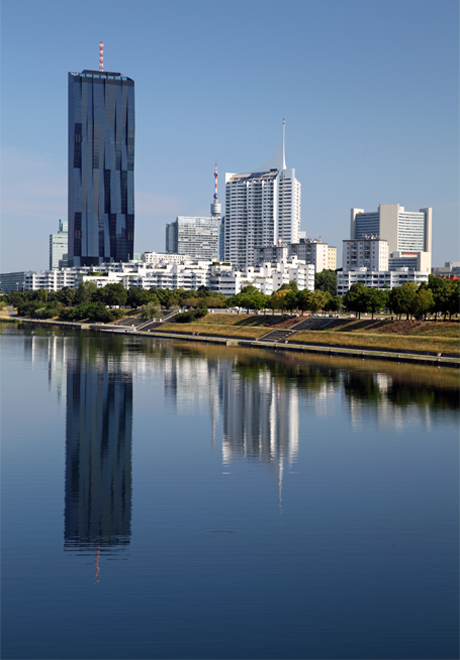