One of the tallest structures in Vienna is the so-called Andromeda Tower. It was the first building in the newly built Donau City district. The name comes from Greek mythology. In this Andromeda is the daughter of the Ethiopian King Kepheus and Cassiopeia. In the mythology she was forged to a rock by the sea, to ward off possible evil.

The office tower was under construction from 1996 to 1998. The responsible architect from Salzburg was Prof. Wilhelm Holzbauer. Holzbauer also designed the popular Kärntner Straße in Vienna’s city center as well as the Vienna U-Bahn.

With 29 floors, the building reaches a roof height of 103.5 meters. If you include the height of the antennas, it has a total height of 113 meters.

Also in this project the developer was the WED Vienna Danube Region Development Corporation. It sold the completed skyscraper for 57 million euros to Karl Wlaschek, founder of Billa. On the lower floors, catering establishments, shops and service companies can be found. The offices are on the upper floors of the building. There are companies such as the electrical engineering group ATB, the computer company Unisys or the conglomerate General Electric. Representatives of international organizations from Austria and Japan also have offices in the Andromeda Tower. The skyscraper has a floor area of ​​34,450 sqm. For example, an office space of around 734 sqm on the third floor costs you 11 euros per square meter per month.

The Andromeda Tower offers an optimal location in the Donau City, surrounded by the Vienna International Center as well as other buildings and leisure facilities. The tower is also nearby the highway and subway. In terms of optics, the office tower is characterized by an elliptical layout. Thus, there are spacious single and group offices. The interior spaces are innovative, modern and provide with angular room dividers an exciting contrast to the outervic shape. In addition, the tower is equipped with chilled beams, sun protection, district heating, lifts and an in-house subterranean garage. 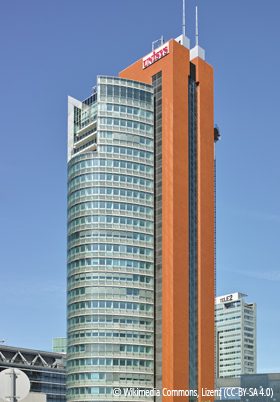